Timely and qualitative aircraft maintenance has paramount importance to flight safety and reliability. In Volga-Dnepr Group, this area is assigned to Volga-Dnepr Technics. 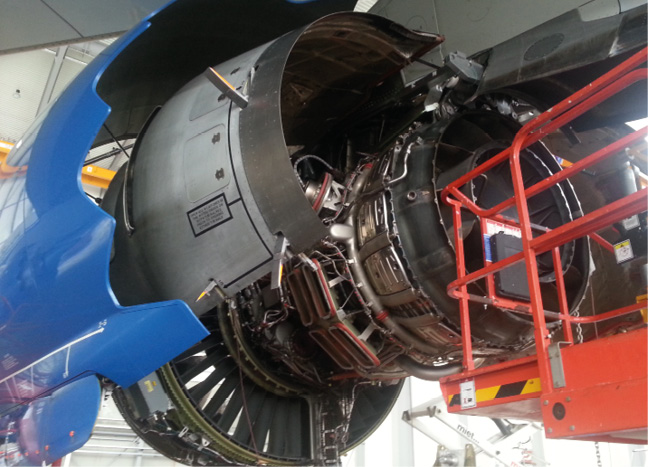 Volga-Dnepr Technics is a provider of maintenance, repair and overhaul (MRO) services for both Russian and foreign aircraft. The company maintains not only aircraft belonging to Volga-Dnepr Group but also aircraft of other carriers. It was established in 2008, combining the Group’s MRO bases in Russia, Europe and the Middle East. Currently, its certified stations operate at 10 airports in Moscow, Ulyanovsk, Krasnoyarsk, Krasnodar, Sharjah, Fujairah, Leipzig and Frankfurt am Main. The Volga-Dnepr Technics Sub-Group’s revenue in 2015 year amounted to USD 44 million with the biggest contribution coming from Volga-Dnepr Technics Moscow of USD 17.4 million.

In 2015, Volga-Dnepr Technics Moscow successfully passed the audit to extend its EASA Part-145 certificate which allows it to perform basic aircraft maintenance for the Boeing 737 NG at Sheremetyevo airport. As well as its existing Bermuda Department of Civil Aviation approval (BDA 297) for aircraft maintenance, the company obtained the OTAR 39 certificate, which allows it to provide services for maintaining the airworthiness of aircraft registered in Bermuda. We also completed the project to establish the aviation training centre Part-147 on the base of Volga-Dnepr Technics Moscow, which was launched in 2014.

The punctuality of Volga-Dnepr Technics Moscow in performing work for its major customer – AirBridgeCargo Airlines – reached 99.61% compared with 98.6% a year earlier. The average level of technical delay was only 0.07 hours versus the planned indicator of 1 hour. The company continued to actively develop its work with third-party customers outside of Volga-Dnepr Group. In 2015, the share of Volga-Dnepr Technics Moscow’s revenues from third party airlines increased by 6% and amounted to 17.22%.

Volga-Dnepr Technics Moscow was ranked among the TOP 10 most innovative companies in Russia and the TOP 30 largest and fastest growing companies according to ratings prepared by the experts of PricewaterhouseCoopers (PwC) and the NRU Higher School of Economics. The rankings took into account indicators of turnover, growth, and production innovativeness.

In the UAE, Volga-Dnepr Group cooperates with Volga-Dnepr Gulf which has been operating since 1996 and currently offers an ultra-modern hangar facility for maintenance and repair of aviation equipment within an area of approximately 22,000 m2 at Sharjah airport. It also operates an MRO line station in Fujairah. The company has maintenance licences for the Boeing 747-400, B737 CL, B737NG and the A320 family, as well as for An-124 and IL-76 domestic aircraft which are actively operating in Russia, European, Asian, and African countries.

0.07 hours average level of technical delays of Volga-Dnepr Technics Moscow with a planned indicator of 1 hour

10 airports MRO bases in Russia, Europe, and the Middle East

In 2014, a new line station was opened at Pashkovsky airport in Krasnodar, which has all the necessary equipment for line maintenance of the Boeing 737NG and Airbus A320.

In 2015, Volga-Dnepr Gulf began to perform aircraft maintenance of the Boeing 747-400 of the Malaysian charter operator Eagle Express as well as the Boeing 737-300 of Avia Traffic Company (Kirgizstan). In January 2016, the company successfully completed the whole cycle of the necessary procedures to obtain the permission of the European Aviation Safety Agency (EASA) to perform basic maintenance (C-check form) of the Boeing 747-400 and Boeing 737 NG in the Sharjah hangar facility.

The successful work of Volga-Dnepr Gulf in the territory of the Sharjah airport free economic zone earned it a merit badge in the SAIF Zone Excellence Awards.

The structure of Volga-Dnepr Group includes AMTES GmbH (Aircraft Maintenance and Engineering Service GmbH), which performs line maintenance and repair of aircraft made in the West and Russia, and also provides such service as sending technical experts to any airport in Europe at the requests of customers.

The main production site of AMTES GmbH, Leipzig/Halle, is situated in the heart of Europe. A new modern hangar facility for AMTES GmbH with an 8,500 m2 area is designed for simultaneous servicing of one wide-body or four narrow-body planes. The hangar is equipped with two moving crane that work independently of each other. 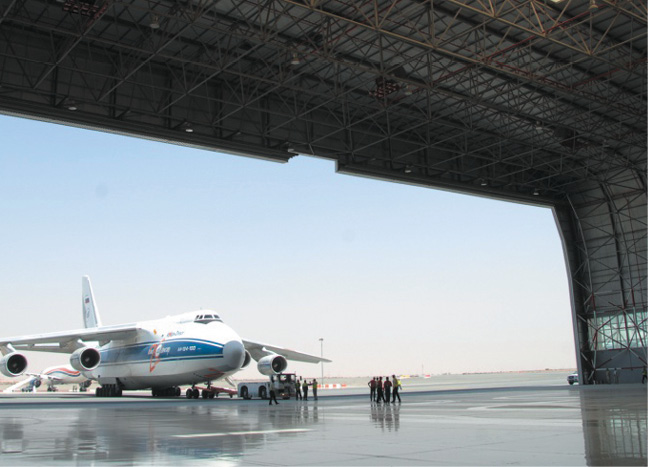 40 thou. m2 of specialised production areas

In 2015, AMTES GmbH received an FAA certificate for maintenance of Boeing 747 aircraft registered in the United States in the volume up to A-check, inclusive. All in all, in 2015 AMTES completed some 50 A-checks on Boeing 747-400/8 and Boeing 737 CL aircraft. In addition, this year, the AMTES GmbH wheel and brake repair shop successfully made about 1,000 wheel repairs of AirBridgeCargo aircraft, including overhaul. For the first time, AMTES also replaced a GEnX-2B engine.

In 2015, the Interstate Aviation Committee issued a certificate of conformity to the requirements of AP-145 to the company, which authorises it to perform refinement under service bulletins on the AN-124. In addition to this certificate, the company possesses all necessary certificates for maintenance of these unique cargo planes. Today, most of the work for the maintenance of airworthiness of the AN-124-100 is carried out by AMTES GmbH. In 2015, about 40 forms of maintenance were performed.

The development strategy of Volga-Dnepr Technics Sub-Group aims to further expand the range and quality of services. In particular, it is planned to transfer the processes of production and maintenance service, and aircraft modification, to the newest hangar facilities in Leipzig and Sharjah, mastering new types of aircraft MRO, developing a network of line service stations and an aviation training centre.